ah yes....the saga continues
Another trip to the Big City to see the Spine Surgeon....but this time, I'm driving and Big Pop is riding Shotgun and thinking, in his mind anyway, that he is the navigator.
I have news for him, he is no way the navigator in the Big City.  He may be able to navigate the deep woods of the North but when it come to the Big City....that's where we draw the line.

We start out going down the East Beltline....that's the stretch of highway that when you want to make a left turn to go East that you need to continue South, make a u turn to go North to go East.
I know right....I just go with it, Big Pops, not so much....it really, really annoys him.
So we're heading south and I know where I'm going, really I do....we need to make a right turn on East Fulton to get to where we're going, I know this....really I do.  As we approach the intersection where we need to turn right, West, on East Fulton, Pops starts to exclaim that I'm going West on Fulton not East.  I try to tell him it's East Fulton but we need to go West...he continues to insist that it's West Fulton and we need to go East.  Now keep in mind that I know which way I need to go but what do I do.....I go through the intersection because Pops is navigating and thinks he knows where he is going.
He doesn't....so, I go through the light and then I need to make a u turn and head north to make yet another u turn to head south so I can turn West on East Fulton....like I wanted to do in the first place.  As this point he decides it would serve him best to keep his navigational ideas to himself.
He managed that quite well until we arrived at our destination and we needed to park....
yes, another parking ramp.  This time he says we need to go here.....HERE, so I enter....the bar won't go up, so I press a "call button" at which time I realize that we are trying to enter the Physicians parking area and of course we aren't allowed, so.....I have to back up, yes....back up out of the entrance to the area where we aren't allowed and continue on to the visitors parking area.
We're parked, we struggle trying to decide which entrance we should take....I decide to follow "The Navigator".  We end up inside the building and have no idea where to go from here.  We go up two floors and I finally decide that I'll go into an office area and ask.
I do, say I need 1900....the receptionist says "you're in 1900, which suite do you need?", suite?  we're not from the Big City, we didn't know we needed to know which suite.  She was very kind and helped us find our way by asking us which Dr we were there to see.  After a bit of searching and the help of a kind security guard we found our way, seen the surgeon, and were on our way shortly.
It is now that we realize that our car is parked directly outside the entrance to the area where the surgeons office is....the door I wanted to enter at...the door "The Navigator" said wasn't the one.
I know, right.
We get into the car, I tell "The Navigator" that his directional services are no longer needed so just "shut up and ride".  I manage to find my way out of the ramp and along to drive to access the street I need to head home.  I am stopped at the street waiting to proceed and looking left for traffic when "The Navigator" loudly proclaims "JEEP".  I look to the left at this point and see a Jeep Cherokee ready to pass.....I look at "The Navigator" and calming ask him, "as opposed to what, a Buick".
He decides to shut up and ride.
We actually manage to make it, without incident back to the expressway and headed north towards home.....all without him shouting out, "FORD", "JAG" or any other vehicle make for that matter.
I know, right.
At this point it wasn't noon yet.....beer wasn't in order according to the time of day or I truthfully may have stopped along the way for one.
"The Navigator" has an MRI scheduled for this week.  Fortunate for all it's in Big Rapids...not a Big City, and one he is more familiar with.  It's a good bet he will be the driver and the navigator as well.  I have a feeling there will be more Big City Adventures for us in the near future.  I choose to take a break from this one.  I can send him out on his own.  Something I don't dare to do on a Big City one....Lord only knows what would become of it all if he were on his own....in the Big City....
Big Pops, the Yooper.....let's just say, it wouldn't be pretty.
Stay tuned for the ongoing saga of the Up North Rednecks on their Big City Adventure.
Cheap entertainment at it's best.
Oh....and please say a little prayer for us.

here on the Lane.
Blue, blue skies, sunshine and oh so comfortable temps, and the forecast promises a repeat for the next few days.  Funny how weather can make the mood so much better....or worse sometimes isn't it?
Silly for something that we have no control over but it's a human nature thing....
this time of year it brings a smile to my face when I can grab my hoodie, a hot cup of coffee and head to the Farmer's Porch in the chill of the morning.
Ahhh yes.....Fall

A sneak peek at my latest design in punch needle.... 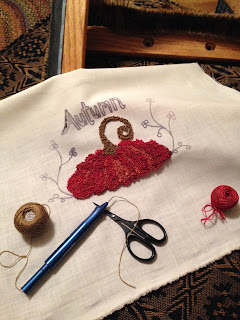 a bit behind on punching it but plan to work on it more this weekend.  I may change up the lettering to say "Give Thanks"....hmmm
It's a lumpy pumpkin of sorts and punched with Valdani #8  I used a variegated on the body of the pumpkin and am very happy with how it turned out....need to decide border and background and get to punching.  Pattern offering soon on this as well as three other new designs, two everyday and one Christmas.  Watch for them here and on my Etsy site atyellowdoglane and also on PatternMart.

Heading off to The Primitive Willow right now to help Kim place some furniture pieces....decided there needed to be a bit of fine tuning on placement and I'm all about that kind of fun!
Be sure to mark the opening dates of
September 14,15,16 & 17
and plan to attend.....I think you'll like what they have to offer! 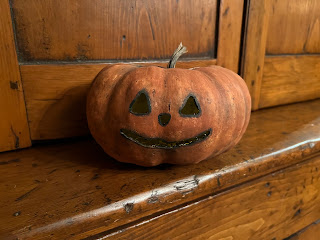