a well known moniker by those who work or have worked in the oil fields.
Makes it sound sort of cute, like the pumpkin patch or the strawberry patch.
Well, that would be a definite misnomer if you asked those who have spent many hours, days, months and years working from dawn to dusk and beyond in those "patches".
Not much cute about it.  Time spent in sub zero weather, scorching heat and everything in between.  The only respite offered, in the "dog house, most often an old and used up camper trailer remade into somewhat of a locker type room for the workers to take breaks and lunch.
Not an easy job to glorify, but this guy....the guy that many of you know personally and most of you know as Big Poppy, well he kinda liked this job. 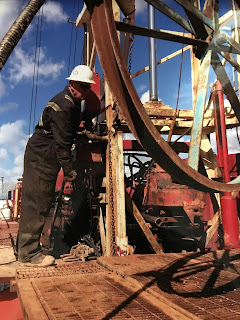 After nearly forty years, almost 30 of those spent at the helm of this big red rig, Big Pops hung up his hard hat and those oil covered coveralls and bid farewell to those long hours, early mornings, late nights and too much time spent away from home.
As of last Friday, he has officially joined the ranks of the retired.  His last day was a tough one.
Saying goodbye to many people and routines that have consumed so many years of his life.
I have been blessed enough to have spent over half of those years with this man.
He never complained of the hours, the cold or heat, the sometimes back breaking work.  The days missed going in over those years can be counted on one hand.  A work ethic that many know nothing of in todays world, nor have they experienced this level of hard work.
Not a glorified job by most but I am writing this to give just a bit of that glory deserved to Big Pops.
Pulling oil and gas from the ground over the years to help the country move along.  Just a small cog in the big wheel that makes it all turn, but in my book, a very important one.
I'm sure you've figured out by now just how proud I am of this man and I am so excited that he is stepping into days, hopefully years, of much deserved respite and time to enjoy life. 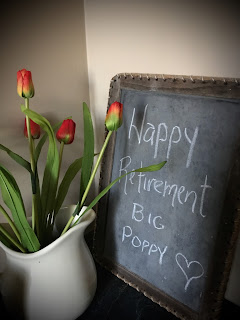 I've been telling him that once he retired I was going to teach him how to dance.
He had his first lesson last night.  No fancy dance floor or attire.
Just our outdoor work clothes and the cement garage approach.
I cranked up the mini Bose and the notes of Brett Young's "In Case You Didn't Know" wafted through the treetops as we did a sweet step on our make shift dance floor.
For his first lesson I will have to say, he did mighty fine.  He even managed to dip me quite gracefully at songs end.  I know, it's probably hard for you to envision "graceful" when thinking of two old fogies, in their work clothes, on the cement approach, dancing to a portable sound box.....
but I can assure you, grace was surely there.
Here's to many more dances on the cement dance floor!
Oh, and Big Poppy.....In Case You Didn't Know, I'm Crazy About You.

just Easter Blessing that we wish to You

A day filled with blessings to you and yours....
A month filled with all that and much more!

From All of Us here on the Lane!
Big Pops, Sharon
Sophie, Ivy and Isabelle
at April 01, 2018 No comments:

It's impossible to forget a Dog that gave you so much to remember  She gave us unconditional love and loyalty She left us wit...