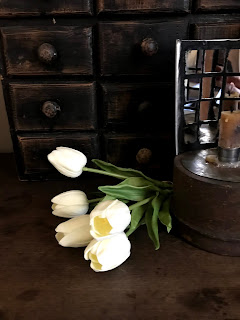 We have just what you need to add a sweet touch of Spring to your home....

Click on our "Offerings from the Lane" link in the left column to take a peek! 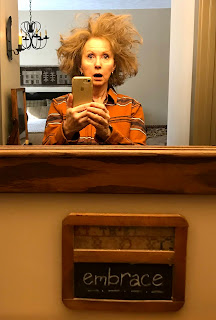 Did I make you scream?  I think I almost screamed myself and I knew it was me!

This is me.... after a valiant try at back combing my hair, upside down, with the use of only my non dominant arm.  I know, there probably should be a video to share as I'm sure many of you have wondered how one might accomplish this task.  Don't try it.  For starters I got dizzy when I stood up, scared myself when I looked in the mirror and had to try smoothing the mess out with the non dominant arm to boot.

This of course all took place after Big Pops try at getting my hair into a clip.  He said it was too slippery?  Not to mention that he kept losing the clip in those big paws of his.  He did manage to finally get the clip  in..... it was sideways.  I couldn't get it in sideways if I wanted to, and I'm a veteran Hairstylist.  He offered to try and curl it with the iron, I diplomatically declined when the thought of the burns from the iron entered my mental picture of the task.  The guy does have a way with those hair clips though.

Pops has also been doing well with the vacuum and he makes a good stab at making the bed.  He has actually taken on the role of Chief Cook and BottleWasher here since my shoulder surgery a little over a week ago.    They tell me it will be thee months plus before I'm able to do my normal tasks, I of course scoff at that thought.  I am woman, after all!

This has given me just one more thing to add to the long list of occurrences, losses, gains and just things in general that I must try to "embrace".  Some I do with laughter, some with tears..... some with a swear or two.  I even have a few that I've stomped on and thrown out the back door, never to allow back in.

At the end of each day I try to reflect on what I've been handed to embrace and remain thankful for all the good that's in that handful.

I hope you noticed that I did a bit of sprucing up here on the site.... new background, new colors, new photo.  I'm in hopes that it will help me to embrace the task of writing and sharing more here and I have lots of stuff in mind, and to be honest.... it was something I could do fairly easily with my non dominant arm by sneaking in my right hand to help a bit.  I have put wallpapering, stenciling, hairstyling and quite a few other things on the back burner for now.  I can still dance though, just no cartwheels.

May your handfuls at days end be full of all things good...... with a Big Pops tucked in for good measure.

From the Lane ~ Sharon 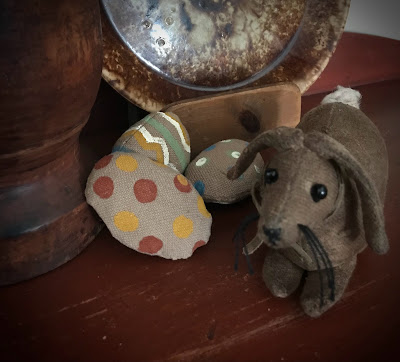