and I do hesitate to call it an "adventure", believe me!

I'll start from the beginning by telling you that Big Poppy aka Wayne injured his back at work.  He's home.....all day long.  Every day.
Today he has a Doc appointment in Grand Rapids, not a huge city for those of you who aren't familiar, but you need to know that Big Pop is from the U.P.  They don't have cities there.  He insists that he can drive.  He's a good driver....he isn't a patient one.  He also doesn't know the city, therefore I am the  navigator.
We make it to our first stop without much fanfare, if we don't catagorize the minor flares of impatience at fellow drivers and his mini swears.  We pick up a script and he has an X-ray and then we're on to the next stop.  Things go well and by this time he's feeling pretty sassy.  This was a quick stop for me to make a return to Macy's.....now we're off for the real challenge.
Keep in mind that it is just the beginning of rush hour....in the city....people starting to head home....others heading in for a later shift.  Pretty much bumper to bumper traffic on a divided highway...lots of traffic lights...drivers weaving in and out in a rush to go nowhere.  Oh, and I might mention that the vehicle in front of us was emblazoned with "STUDENT DRIVER" across the back, uh huh, what luck.  We had a short stretch here, thankfully for me, the fellow drivers and most importantly the student driver.  Big was a quick learner on the tailgating, he had it down pat before we hit the expressway and he had also upgraded his swears beyond the mini point.  I just continue to direct.  I wish I knew the correct answer for why you have to continue north past a street you want to turn on, make a u turn to head back south to turn onto the street that you wanted to turn on but were forced to cross.  I was asked this question numerous times, I finally started answering, "just do it" and it wasn't a Nike like referral.
The expressway was busy but quite uneventful, just a short jaunt to our exit and then a turn on to the Medical Mile right downtown....during rush hour...we're not sure where we need to be...Big Pop is thinking he's Dale Jr at this point and we speed by the medical building we need to be at.  We end up parking two lots down from where we need to be...first free space we come to...thus we climb stairs to get to the street level, out of the ramp to the sidewalk.  We then walk three blocks....uphill....80+ degrees.  He walks slow anyway, his back is injured...today you have to set stakes to see that he's moving.  We make it to the building, inside where it's pleasantly cool, see the Doc and as we leave an attendant asks us if we had valet parked....right, do we look like we valet parked?
The trip down the hill wasn't much faster than the one up but we're back to the ramp...we can't get into the door to the steps...we try everything...it's rush hour, all these cars, all these people and the rednecks from the North can't get into the parking ramp door, so....we walk a bit further down the hill and we enter where the cars enter, around the bar that goes up to let the cars in and on to the Blazer.  We attempt to exit....we can't...we don't have our ticket validated and there is no cashier on duty.  Of course I'm unable to offer up a good answer to his question as to why they wouldn't have a cashier on duty...but there wasn't one, the bar wouldn't go up, we couldn't get out of the ramp that we couldn't get in to a few minutes before.  Lucky for us, and others I'm sure...a nice man on a little cart takes pity on us and has us follow him in a maze like way through the ramp to another exit where he gets us out.
Big is happy for a few seconds...then we hit the rush hour traffic trying to get out of the city....it wasn't pretty.  I do know my way around most areas so I continue to direct through the side streets so that we might avoid the 3 mile traffic back up on the exway....can you imagine if we had gotten in to that...I shudder at the thought.  We make our way back to the original divided highway we headed down on...Dale Jr style of course....Big is feeling sassy again...I need a nerve pill.  I settle for a bite to eat and seconds on the great tomato herb light ale craft beer that was among the offerings.
We head off towards home...I'm relaxed ready for an uneventful rest of the ride home, and then we hit the corner where we need to go south in order to turn north onto the divided highway towards home.  Big Poppy decides he doesn't want to do that, I say....he says I told him he could turn left.  He makes the illegal left turn without incident.  It was my fault of course.  I didn't talk to him the rest of the way home. 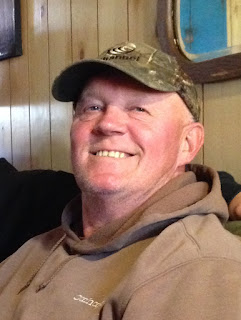 Did I mention that I love this big guy?  Yes, he had his camo hat on...not the Carhartt sweatshirt, it was too hot, Carhartt t-shirt.  He did look sassy though!

Stay tuned....he has another appointment next week.  I might be behind the wheel.

Wishing you all a wonderful holiday weekend....
Big Poppy and his Girls will be staying on the Lane....
no traffic, no stress....but still the cold beer!

from a teeny tiny ball of fur, rescued from the edge of the swale, to a beautiful gray tortie....  Mothered by Gracie and then by Sophie.  I... 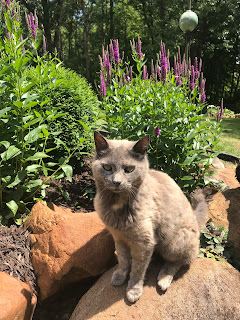